Skip to content
by Ørjan Matre on September 17, 2020September 18, 2020
The accordion player Frode Haltli has been productive during the Covid lockdown. He has recorded no more than three solo accordion albums. In his own words:

In May 2020 I started a recording project. The idea was to use this open calendar period to freshen up, rehearse and tape some not often heard solo pieces, most of them never recorded before. After a couple weeks of preparing, I got the key to our local church, set up a stereo pair of Neumann microphones, and started recording. On this third volume I have recorded three standout pieces which I have performed frequently at solo concerts the last decade or two. 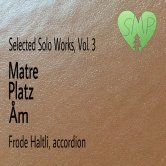 The third volume contains my accordion piece “Nephilim Song”, commissioned by and premiered at Wittener Tage for neue Kammermusik back in 2012. Nephilim Song is published by Edition Peters.